John Stewart announced plans to step down as anchor of ‘The Daily Show,’ reports The New York Times. 15 years is a good run, but it’s sad nonetheless. There have been a lot of shifts in the world of TV lately, and I expect this one to be the least welcomed. 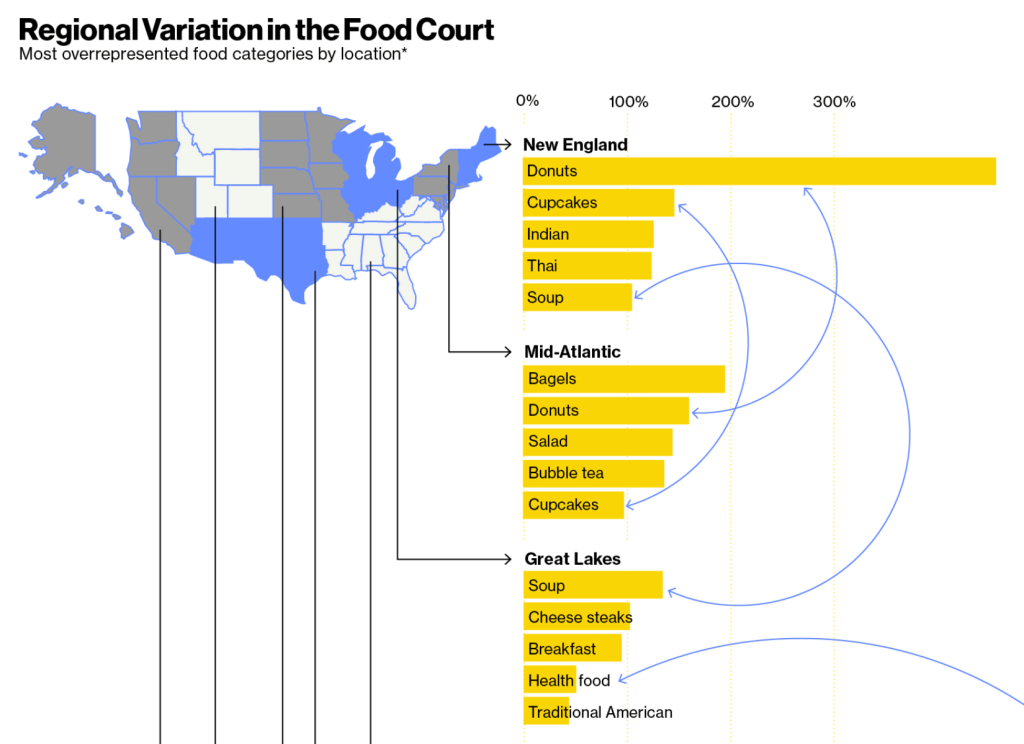 CHARTS! CHARTS! CHARTS! Bloomberg brings us today’s best chart-laden post with this eminently well-done piece, “The Average American Mall Explained in Six Charts: Your definitive guide to shopping centers (or at least what’s left of them).” Dissecting what’s in America’s malls, who goes to them – and even going down to nitty gritys like regional variances in food court offerings – the business publication uses the marriage of data and graphics to in a compelling package to convey information that could be viewed as totally boring. Do I necessarily need to know what part of the country has the most CPK’s at it’s malls? Not really, but data like the breakdown of what stores are located in malls in communities with a predominant Hispanic community (or White, Black or Asian) could reveal something about our culture, racial divisions, spending habits and/or marketing.

Also from Bloomberg today comes this enticing headline, “Hard Liquor, Pet Care and Other Job Creators,” an article on the release of last month’s employment report by the U.S. Department of Labor Statistics.

Amid facts and figures on employment in pet care, petroleum-related industries and securities brokerages, there were a few noteworthy bits. For one, employment in artesianal alcohol production (wine, beer and spirits combined) grew from about 70,000 in January 2010 to over 105,000 in December 2014, whereas the number of workers in soft drink production slowly declined from about 75,000 to about 70,000 during the same period.

Most surprising were the figures on employment in traditional publishing versus internet-only publishers:

The title of the chart itself, “When will these lines meet?” is indicative of the on-going rebalancing within the publishing industry as a whole. While journalism professors and newspaper old hands often bemoan the demise of traditional media as a result of the Internet, employment in online-only publishing hasn’t exactly skyrocketed in the last four years, but given that many of these online-only publishers are startups, the gain of some 75,000 employees in the workforce is likely to make some major cumulative impact. Likewise, the loss of about 100,000 jobs in traditional publishing will have significant ripples in the production, management and editorial apparati of the larger, more established companies. 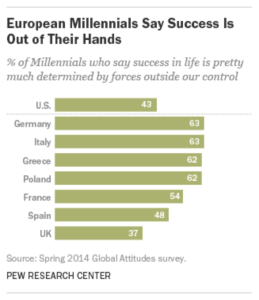 The Pew Research Center published the not-so-surprising results of a study comparing views and attitudes about the future between European and American millennials, finding the majority of Europeans surveyed think “success in life is pretty much determined by forces outside our control.” It’s hardly a revelation that only 43 percent of American millennials − who grew up in a culture littered with folklore of Manifest Destiny and ‘Rags to Riches; Bildungsromans −  think this. Nor is surprising that 37 percent of those surveyed in the UK – with a legacy of Global power and influence and a modern day effort to safeguard their own economic destiny by preserving the Pound and eschewing the Euro – hold this notion. Pew posits:

In both Europe and the United States, such outlooks are not a generational issue, but a cultural one. Our data have shown that youthful and elderly Europeans see themselves as victims of fate, while young and old Americans alike see themselves as masters of their fate.

Not earth shattering. But the countries with the highest number of respondents who believe success is derived from outside sources are somewhat interesting: Germany (63%), Italy (63%), Greece (62%) and Poland (62%). But why these countries?

Here are some ideas: Germany suffered two devastating world wars and remained divided during the Cold War, though its economy has remained stable during the recent crises. Maybe they’ve read a lot of Herman Hesse… Greece‘s economy is slowly stabilizing after six years of record-setting unemployment levels and other financial woes, but technically remains in a depression, notes the Washington Post. Poland was brutally occupied twice within living memory, first by the Nazis, then by the Soviets. Today Poland, member of NATO and the EU, is still in the middle of geopolitical conflicts between the West and Russia over energy resources and transportation and regional security. Italy is known for its dysfunctional government and a less-than-reliable train system, and is also home to Europe’s largest population of Catholics. Who knows? These certainly aren’t conclusive answers, but it does seem worthwhile to explore the cultural contributors behind these survey results.

The New Yorker recently moved from its office of 15 years in Times Square to 1 World Trade Center, unleashing a wave of nostalgia and some navel gazing over the storied 90-year-old publication’s various homes, the memories they housed and interesting items that were uncovered during the move. “Office Life,” a podcast released yesterday, (that I haven’t listened to yet) by The New Yorker‘s Nick Plumgarten and Emily Nussbaum, discusses the items revealed during the move and “the special place that offices occupy in modern culture.” Delving a bit deeper into that topic, Plumgarten published a piece (which I have read) a few days ago describing the recent move, his feelings on leaving the neighborhood around Times Square and how the areas around The New Yorker‘s various offices also changed over the decades. Overall, it’s an interesting look at how an office fits into the dynamic of a neighborhood and how a neighborhood can impact the culture and behavior of office workers.

There’s rarely any news about Patch, the network of hyperlocal news sites that spread rapidly across the U.S. as the first decade of the 2000s wrapped up. Hundreds of journalists in many parts of the country were hired to populate the community news hubs with content. Then, in 2013, when the venture failed to get revenue figures in the black, about 400 hundred Patch websites were closed and hundreds of journalists were fired. In January 2014, AOL sold the company to Hale Global, an investment firm, and another huge wave of layoffs occurred. Today evidence of a turnaround were revealed as Digiday asks, “Has Patch finally cracked the code on hyperlocal?” Cue reaffirming quote:

“We’ve gone from a company that’s lost hundreds of millions of dollars to holding its own,” said Warren St. John, Patch’s editor-in-chief, a former reporter for The New York Times.

Yesterday the internet was provided with this cringe-worthy tale of one woman’s quest to produce yogurt using bacteria living inside her vagina via Vice Magazine‘s Motherboard section. Reader beware, the descriptions of her yeasty bounty are not for the faint of heart.

After a 17-year ban resulting from the spread of BSE (Mad Cow Disease) in Europe, limitations on importing beef from Ireland into the U.S. have been lifted, the Guardian reports. 17 years… that’s a long time, and the reporter really needed a light transition before diving into the more serious facts and figures on Mad Cow Disease and to convey the gravity of time’s passage. One anxious, deadline-driven thought led to another and out came this line:

The Irish beef last served in the US would be old enough to drive by now, had it the necessary appendages and wherewithal.

Cows. 17 years. Cars. Hmm. There’s a connection there somewhere. Hey, at least it wasn’t a cliche.

A few paragraphs after a chef describes the “buttery, soft texture” and flavor of the Irish beef came this line, which wins today’s superlative of ‘Best Salvaging of Non-Impactful, Redundant Quote’:

Pierre Landet, executive chef at Felix, a French restaurant in Manhattan’s Soho neighbourhood, said he uses mostly American beef, but was impressed by the Irish variant.

The cadre of chefs and journalists assembled to taste the Emerald Isle’s beef did not seem particularly wooed by the prospect of buying the Emerald Isle’s bovines, with market price and an affinity toward local food products apparently the main grounds behind the apprehension.

The Guardian published a beautiful collection of photographs of New York City in the 1970s and 80s by photographer Camilo Jose Vergara. This was the second installment in the Guardian‘s three-part series of Vergara’s photo essays on four decades of changes in America’s urban landscapes.

Another retro look at NYC was posted via Mashable today, featuring a photo essay from Paris Match photographer Jack Garofalo’s six week visit to Harlem in the summer of 1970.

An original copy of the Magna Carta was found tucked away in 19th century scrapbook in Kent, England, Discovery News reports. While about one third of the document is missing due to water damage sometime over its centuries of existence, it’s one of a handful of copies of the historic charter known to exist.

Cameras on NASA/ESA’s Hubble Space Telescope captured a unique image of what appears to be a smiling face emerging from the depths of the cosmos. The “eyes” were in fact two bright galaxies, according to NASA, and the lines of the “smile” were the result of gravitational pull bending light, a phenomenon known as ‘gravitational lensing.’ The space agency explains:

Galaxy clusters are the most massive structures in the Universe and exert such a powerful gravitational pull that they warp the spacetime around them and act as cosmic lenses which can magnify, distort and bend the light behind them. This phenomenon, crucial to many of Hubble’s discoveries, can be explained by Einstein’s theory of general relativity.

I discovered that the U.S. National Oceanic and Atmospheric Administration has an awesome Instagram account (@noaa), offering the public breathtaking shots of earth’s weather patterns from their satellites, a glimpse into the technology their researchers use, and action shots of the organization’s work in harsh climates and exotic locales. The National Weather Service‘s Instagram account (@nws), on the other hand, is pretty meh . There’s a lot of potential for the NWS to produce some cool Instagram content (only 13 posts NWS?!?!?!)…but it looks like they could use a community manager.

To close out today’s post, here is this gem of wisdom from Neil deGrasse Tyson that I stumbled upon:

.@remygale You ask if ejaculating in space propels you? Solid liquid or gas: any part of your body comes out, you'll recoil.

So, that settles that.